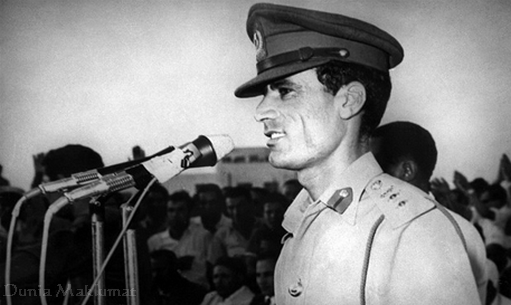 More than 40 years ago, the 27-year-old colonel Muammar Gaddafi masterminded a successful revolution that toppled King Idris,keeping a stronghold over the Libyan state for more than 42 years

-1942: Gaddafi is born in a Bedouin tent near Sirte

-September 1969: The Libyan monarch, King Idriss, is ousted in a bloodless coup by a group of army officers. Gaddafi emerges as revolutionary leader

-December 1969: Gaddafi announces a plan to merge Libya with Sudan and neighbouring Egypt

-1970: The new regime closes British and US military bases in Libya

-1976: Gaddafi publishes his Green Book, which espouses a Marxist and anti-capitalist world view

-1977: Libya is renamed the ‘Socialist People’s Libyan Arab Jamahiriya.’ Political power is formally vested in a network of ‘people’s committees’

-1977: Gaddafi annexes the northern Chadian Aouzou strip, making the first of a series of Libyan interventions in its southern neighbour

-1986: US president Ronald Reagan orders an air raid on the Libyan capital after blaming Libya for a bomb attack that killed a US soldier stationed in Germany. The US raid kills 44 people, including one of Gaddafi’s adopted daughters. Official relations between the two countries are severed

-1988: A US airliner explodes over the Scottish town of Lockerbie, Scotland, killing all 259 people on board and 11 on the ground. Suspicion initially falls on Syria, but a Libyan agent is eventually convicted by a court operating in The Hague. He is imprisoned in Scotland

-1989: A French airliner explodes over West Africa, killing all 170 people on board. Suspicion again falls on Libya. Ten years later, a French court convicts six Libyans for their alleged role in the bombing, although none of them are ever surrendered by Libya

-1992: The United Nations imposes sanctions on Libya for the Lockerbie bombing

-2003: Libya agrees to compensate victims of the Lockerbie attack, and UN sanctions are lifted. After secret talks with Washington, Gaddafi also says his country is giving up on its efforts to produce weapons of mass destruction

-2005: Major US oil companies resume operations in Libya for the first time since 1986

-2006: The United States and Libya resume full diplomatic ties. The US removes Libya from its list of countries supporting terrorism

-2007: Five Bulgarian nurses and a Palestinian doctor convicted of intentionally infecting Libyan children with the virus that causes AIDS are freed after eight years in a Libyan jail

-2009: Gaddafi visits Italy after signing a treaty settling colonial-era disputes. Meanwhile, seriously ill, the Libyan agent jailed over the Lockerbie bombing is freed from his Scottish prison and allowed to go home

-February 2011: Unrest breaks out in several Libyan cities following revolutions in a number of other Arab countries, notably neighbouring Tunisia and Egypt

-15-19: Inspired by revolts in other Arab countries, including neighbouring Tunisia and Egypt, a rebellion erupts in Benghazi, Libya’s second city

-20: France and Italy join Britain in sending military advisers to assist the rebels

-29: France says it has air-dropped weapons to rebel forces

-28: Rebel military chief General Abdel Fatah Yunis is assassinated in the east as insurgent fighters pound forces loyal to Gaddafi in the west

-23: Rebels overrun Gaddafi’s fortified headquarters in Tripoli after heavy fighting. They find no trace of the strongman or his family

-1: In Paris, the UN and major powers unblock $15 billion (roughly 10 billion euros) in frozen Libyan assets in return for promises of democratic transition

-9: World police body Interpol calls for the arrest of Gaddafi, his son Seif Al-Islam and intelligence chief Abdullah Al-Senussi for alleged crimes against humanity, following a request by the ICC

-12: Niger says that 32 members of Gaddafi’s inner circle, including his son Saadi, have arrived in Niger

-21: Libya’s new rulers declare victory in the battle for the key southern city of Sabha, but suffer heavy losses in their drive on Sirte

-14: NTC forces clash with Gaddafi supporters in the capital

-18: US Secretary of State Hillary Clinton makes a surprise visit to Tripoli